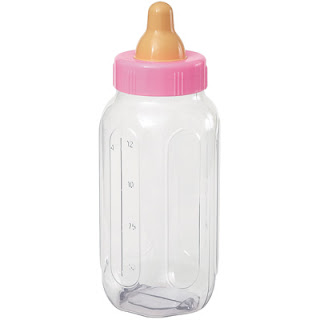 We're about a week out, and Child2 is doing great with his surgery. Now I have time to return to the questions that I regularly get asked about formula.

What about Soy?
Nutrionially speaking, soy formula is pretty much the equivalent milk based formulas. People used to switch to soy if their infant is spitting up alot or they were concerned about milk protein allergy - which can result in cranky babies with blood in their poop. An allergic baby is reacting to the milk proteins which can come from the formula or via breastmilk if mom eats dairy. If the child didn't have milk protein allergy while breastfeeding, she/he doesn't need soy. Also, milk protein allergy often is cross reactive with soy so you aren't helped at all by switching to soy. I have met some hardcore breastfeeders who cut dairy and soy of of their diet for months with the hope their child would outgrow the allergy. (which they often do)


What about medicinal use of soy formula?
Soy absolutely has a place for certain medical conditions like a rare disorder called galactosemia - can't digest galactose - or parents who have ethical concerns with using animal derived products. On the flip side, premature babies are NEVER fed standard soy formula because it can prevent absorption of calcium and phosphorous - giving a child ricketts!


Should I switch formulas because my newborn is lactose intolerant?
No. Your infant is NOT lactose intolerant. Infants cannot be lactose intolerant; all infants are born with enzymes to break down lactose because it is a main component of breastmilk. Lactose intolerance refers to the loss of that lactose breaking up enzyme which occurs at about about a year of age. Many Caucasian populations keep a much higher concentration of that enzyme after 1 year old. Other ethnic groups do not keep so much. Truthfully, most lactose intolerant people have enough of the enzymes remaining that they can eat small amounts of dairy. If this describes you, four pieces of extra-cheese pizza or an extra large Dairy Queen Blizzard are not good options without enzyme replacement (lactaid) - though one small piece or a small cone may be doable.

What about Gentle/Sensitive/Low iron?
Welcome to another marketing ploy. This plays on parents belief that their child is lactose intolerant and the gentle formulas are 'lactose free.' As already discussed, not really the issue. It may give a parent a sense of control that they are trading formulas, but their child's spitting up/irritability will probably improve with time and or technique. These formulas still contain milk protein so if the child has milk protein allergy it won't make a difference.

Most pediatricians will roll their eyes outside of the exam room and let people change formulas because if the parent perceives something relatively harmless to be true, it's not worth the battle. For example, refusing vaccines is very harmful and needs to have time spent on that issue. Changing from a nutritionally sound standard formula to a nutritionally sound 'senstive' formula is safe and fighting it is generally not a good use of time for the doctor.

Low iron formula is not marketed in the US because it is DANGEROUS! The best iron bioavailability (gut absorbing) food is human milk. Human milk has a fraction of the amount of iron in commercial formula, but it is absorbed so well iron supplementation is not necessary unless there is an additional health problem. Commercial formula's iron is not absorbed as well and must have more iron in it to let babies reach a safe level. If you have located low iron formula, it was manufactured in a foreign country, and you are facing a HUGE danger of feeding your child a questionable, potentially non-safety controlled substance that could easily lead your infant to becoming severely anemic.

What about Nutramigen/Alimentum/Elecare/Neocate?
These formulas fall into the 'elemental/amino acid' based formulas. Each of these is an expensive, semi-digested formula for infants with major health issues that cannot safely digest normal formula or breastmilk. They actually smell like they are partially digested and taste horrible too. The closer you get to elemental (Neocate) the nastier it tastes/smells. No one should be using these formulas without the blessing of their doctor. Some of the things that would make a physican consider these formulas include severe reflux, consistent weight loss, failure to thrive, genetic disorders, digestive surgery, and cancer treatments.

My baby was premature - what about him/her?
It's standard practice in the United States to give infants with normal digestive systems milk-based higher nutrient higher calorie formula. Normal formula/breast milk is 20 calories per ounce. Neosure/Enfasure 22 are 22 calorie formulas with a different protein/iron/fat ratio than standard formulas because premature infants have different needs for growth and weight gain. The powdered formula can also be added to pumped breastmilk to increase the calories content to 22 calories. Preterm infants generally stay on these formulas at least six months with some adjustments for weight gain and gestational age. Infants with severe digestive system problems/surgeries will be put on special specific formula diets with consultation of pediatric gastroenterology.

Long story short, it is totally fine to buy generic formula because it is almost identical to name brands. Your child only needs formula till one year of age and the various stages and additives are generally marketing ploys.
Posted by Unknown at 7:16 AM