A little discussion of the flu vaccine 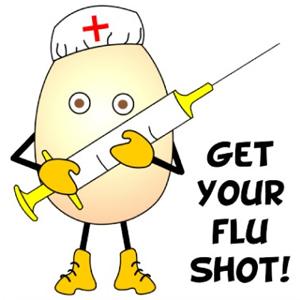 Congrats all, this year's flu season is almost over. I hope you got your flu shot. I did, the kids did, and HubbyJD tried to get his several times. He missed flu shot at the office day and the Rite Aide, Walgreens, and Hospital Pharmacy were out each time we visited.

I was going to give a few words about common misconceptions or you can read the CDC website here.

1) The flu isn't serious.
The flu is very serious. Averaged over 30 years, 30,000 people die in the US per year from the flu and 200,000 people get hospitalized. A good half of the 150 kids who die of it yearly are under 5 and don't have any other medical problems. Mathematically, that would be a worse than 1/10 chance of dying if you get hospitalized from the flu.

2) The flu vaccine gave you the flu.
No, it didn't. If you got an injection, the flu virus is DEAD. A known side effect of the flu vaccine is cough, mild chills, and low fever. The live virus - nasal version - is could theoretically (and has never been demonstrated to do so) give you the flu. Just in case, certain populations like cancer patients and the immunocompromised are never given the nasal flu vaccine. If you aren't passed out on your couch for days having people feed you soup, you didn't get the flu.

4) I don't have to get it every year.
The flu virus is constantly mutation/experiencing 'genetic drift' so the vaccine is updated every year. They make their best guess when they manufacture the vaccine and protection is typically in the 60-80% range, sometimes as high as 90%. Occasionally a strain will show up late and they have to scramble to make a new vaccine, like the Swine flu of 2009-2010.

5) My doctor will be able to give me some meds if I get it.
Not really. The flu is a virus. Our virus fighting abilities are AWFUL. Tamiflu and Relenza are most effective if used for flu prevention or possibly intervening in the first two days of the flu. We use these medications more often if you have additional medical conditions in the hope they will keep you from getting hospitalized. We treat people in the hospital with them, but really, it comes down to supportive care (oxygen, fluids, managing blood pressure, etc), treating secondary infections (pneumonia on top of the flu), and hoping your body will fight it off. We had 20 cystic fibrosis patients on oxygen trapped in the hospital for a month during the swine flu and a full ICU . . .

6) The flu vaccine causes autism.
The research falsified by Timothy Wakefield was only about the MMR vaccine - which didn't cause autism either. Mercury also doesn't cause autism, and some flu vaccines contain a tiny amount. The original mercury argument was that the cumulative exposure of mercury across all vaccines in the first 6 months caused autism was disproved, but to keep people from refusing vaccines, almost all vaccines are mercury-free. (Besides, if mercury caused autism and we took the mercury out of vaccines - why are autism rates going up? Was the mercury actually protecting kids from autism?)

I could write a long time about vaccine misconceptions, and I will eventually in greater detail discuss autism on this blog, but that topic deserves a MUCH longer series of posts. Keep safe and if you didn't get vaccinated this year, make sure you get vaccinated early next year - HubbyJD will be!
Posted by Unknown at 10:13 AM