Making your own Pedialyte 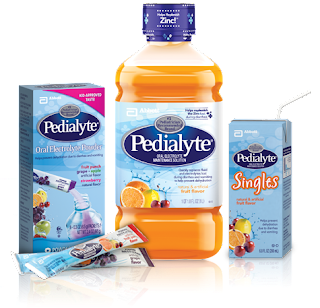 Note that I said 'stomach bug.' There is no such thing as the stomach 'flu.' Technically they are gastrointestinal viral illnesses or sometimes food poisoning which tends to be bacterial. It is easier to say 'stomach bug' than all of that. The flu is actually influenza which is a respiratory viral illness without any gastrointestinal symptoms. Scary stuff like salmonella and dangerous e.coli strains have bloody stools.

When faced with a pukey, poopy toddler, a parent has to realize that eating takes a backseat and keeping fluids in the child is the most important part. One should know a few things.
a) You can generally keep even a vomitting your child hydrated by giving him/her 1-2 teaspoons every 5 minutes as the body usually doesn't throw up such small amounts. It is time consuming and tedious, but much better than a trip to the ER.
b) Milk products, other than breast milk, are generally VERY poorly tolerated. The illness usually strips the enzymes that break down lactose from the gut which results in worsening diarrhea and vomiting with dairy.
c) Juices, water, sports drinks, and flat ginger ale are probably not the best thing to give your child because they are also losing electrolytes. Sports drinks for example are too low in sugar and too high in salt. Juice is too high in sugar and has no salt.

This leads to the Oral Rehydration Solution (ORS). The World Health Organization (WHO) recommends a specific mixture of salt, sugar, and clean water to replace most of the fluid losses. This ORS is used in all sorts of epidemics like cholera in Haiti to replace fluids with great results and decrease in loss of life. Pedialyte and its imitations pretty much follow the ORS formula and add color, flavoring, and zinc to their product. The zinc is moderately important if the diarrhea is severe and prolonged in a child as she/he will lose zinc. The sodium and sugar are actually MUCH more important.

So I had this sick child and one liter of pedialyte in the house. I didn't know how long Child1 was going to be sick and when we'd buy any more. Besides, Pedialyte is $5 a liter, and I'm a doctor. I decided to make my own.

I went to rehydrate.org for the recipe. I have a recipe somewhere from a pediatrics journal I saved - except that I put it somewhere that I wouldn't lose it and have now lost it. Per their recommendations, I added 6 teaspoons of sugar to 1/2 teaspoons of salt in 1 liter of water. As the site mentioned that it would probably taste gross, I added one 1/2 of a mashed banana, which also adds potassium, and 1/2 cup of cranberry juice. I didn't have the suggested orange juice, and the type of juice is not important. At this point, I was feeling quite accomplished that for around $0.30 I had made my own Pedialyte.

Not so fast Jane. Child1 refused to drink it. He clearly felt that the small addition of cranberry juice and banana did not improve the taste enough. I ended up mixing two parts pedialyte to one part homemade ORS to get him to drink it. Eventually, I even tried giving it to Hubby JD with extra cranberry juice, and he wouldn't drink it either. He felt the mashed banana was unappetizing.

A word about dehydration: It is important to note if your child is dehydrated. If they are still crying tears, peeing, sweating, and spitting at you, they are not dehydrated. If they stop making tears, have poor energy, and their skin seems dry or less tight, you should be concerned for dehydration. Unvaccinated children in daycare or school are a higher risk for rotavirus which carries a very high risk for dehydration and death. Kids used to die all the time of rotavirus, pre vaccine, because they got so far behind on their fluid balance.

At the hospital: if your child comes in and they do not appear dehydrated, very little is going to be done for them. As previously stated, most kids even with severe vomiting will take 1-2 teaspoons of fluids without difficulty. In fact, in most case, we'll try to avoid putting in an IV and giving them fluids. Lately, we give them a 'po trial' (Per os = by mouth). First we see if your child can drink a bottle of pedialyte. If they can, we send you home. Often, we'll give your child a dose of zofran - an antinausea/vomitting medication - and then see if they handle the pedialyte. If so, we'll even send you home with a prescription for a dose or two.

Keep in mind that your child may have to be in the ER for 3-7 hours between the waiting to get a room and the po trial. Hopefully you have tried all my previous recommendations to keep fluids in the child first and they are vaccinated, decreasing the risk for dehydration. If your child has some type of underlying medical issue - genetic disease, cancer, cardiac disease, new infant - you are in a higher risk category and should have called your specialist/PCP and be following their instructions. (Many metabolic and genetic diseases need very specific IV fluids because their electrolyte and fluid balance is EXTREMELY delicate and just a small change can lead to a fatal domino effect.)

Take home lesson: Oral rehydration solution is very easy to make. You can make it for free at Starbucks with a few packets of sugar and some salt. It just won't taste very good. If Child1 had been extremely thirsty, I'm sure he would have drunk it. As it was, you can use this strategy to make your Pedialyte type drink last longer. Dehydration can be dangerous so do everything you can to prevent it and get your child vaccinated.