What percentage am I in? 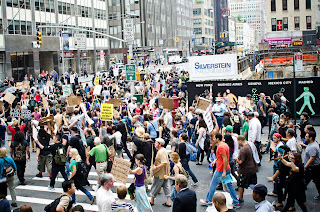 It's not the 1%! Turns out you need to make about $350K a year to be in the current top 1%. I guess that means no one will be picketing outside my apartment since we are in the top 5%. Unfortunately, that means that you can find a surgeon from my last post and go picket outside his/her house instead. The protesters really seem to also be angry about the trappings of wealth the Wall Street people are displaying so ostentatiously.

Thus, even if I did make 350K, you probably still wouldn't be able to find me since I didn't purchase my McMansion, head to toe Prada or buy that flashy sports car I've always wanted. Lots of people think 'doctor and lawyer, you must be rolling in dough.' Wrong again, as evidenced in this blog. Here are the signs we'll just keep wandering around incognito.

Car:
No flashy sports car here. In fact, during residency, my car was totalled while parked outside my apartment. We'd been putting off various repairs while I was on such a tough service, and I was walking to work anyway. My husband texted me during rounds that the assessor had come by and gave us $275 for the car. At least that is what I saw when I glanced at my messages between patients, which I felt was totally acceptable. Turns out that he had sent $2750, making things much more bearable as an unexpected 'windfall.' We didn't actually get another car for 6 months; I just didn't have a car.

Now, we drive two compact cars; one of which is 10 years old. One is leased, but we'll plan on returning it at the end as our family is growing faster than our compact cars. We're actively searching for a used mini-van, though we are going to delay that as long as possible.

Home:
Many of my family and friends think we are crazy to continue to rent apartments with our salaries. 'You could buy somewhere really nice.' 'How can you let your kids grow up without a yard.' My kids are 1 month and 13 months old. They don't care about a yard! We already have a home loan out-of-state and we still have a good 240K in student loans to pay off. And one of my other favorite links - Better to rent or buy? reminds me that I still have years to rent.

Besides, I don't want to be tied to yet another property if we decide to move cities or states. We are moving to a bigger apartment very soon, mostly because we outgrew our 2B, 1BA 850 sq ft apartment. After I've been there a month or two, you'll certainly get a review of how that has or hasn't worked out. It's still an apartment and not a brand new glorious building with stainless steel appliances and marble counter tops. We didn't even bother to look at buildings like that because we knew the space for price wouldn't be worth it.

Clothing:
I do not think I own anything that counts as designer. It's possible I bought a Kate Spade scarf for 95% off at an outlet mall once. I wear scrubs at work which are free and freely laundered by each facility. Hubby JD had a previous job as a corporate suit and has only needed to buy a new suit once in the past 3-4 years. He didn't wear his old ones much during law school. The suit he did buy was at a discount at an outlet mall for something like $150 at most. Same thing with his shirts and ties, all outlet mall purchases. Often, I will buy him shirts or ties and then let our family give him them as gifts.


As a woman I do admit to having multiple sets of clothing to fit my different shapes and you won't convince me to toss them. I have maternity clothes, post baby clothes, and fit weight clothes. It takes up alot of closet/box space, but you can't buy a new wardrobe every time you have a baby. Again, none of it is designer and anything expensive looking/appearing was an outlet mall purchase. Even my almost non-existent jewelry was bought with coupons, none of it costing more than $30. (BTW, 3/4 of my exercise clothing was purchased in college or medical school. It may be time to replace some of it - online deals, TJ Maxx, or outlet mall will be the main destinations.)

Kids:
You've heard me say it before, I bought next to nothing for Child2.We bought very for Child1 except a carseat, pack-n-play, and a bassinet. I believe I have purchased a few pairs of 2 dollar pants from Walmart and I used a Carters gift card at the outlet mall to buy a hat for Child1.Nothing else though. Everyone else keeps buying us clothes or giving us their old stuff. I have a box of 'to give away' baby clothes for showers still with the tags on since we have received so much. (Before you regift something, remember to make sure that it is seasonally and gender appropriate for the upcoming child) As I write the post, Child2 is sitting in his carseat and I rock it every once in a while with my foot since we did not buy a bouncy chair or a swing. He still seems happy.


I get a kick out of reading different selling points of strollers and baby furniture. Why do you need a $600 stroller? I don't care if its a Donkey or a City-mini. Why are you worried about the impact rating of a stroller? Are you playing bumper cars with it? Get one at a garage sale or a thrift store and make sure there hasn't been any product recalls. A stroller is not a car or a carseat which need to be able to protect you from a high impact collision. That $15 umbrella stroller at Walmart has worked great for us.


So someday you may walk by me on the street. You'll see a reasonably dressed young couple pushing to children in non branded possibly used double stroller. Please don't chase us down the street to see if we are making out 200K.:)

In case you are wondering what brought this on. A few weeks ago, No More Harvard Debt and I both read the same article about some Wall Street guy whining about his pain and struggles after only making $350K.
Posted by Unknown at 8:56 AM